This was originally written for my old website on 17-March-2000. There have been many updates since then. With the move to WordPress, many of the URLs have changed and are broken until I finish editing this page. You can find many of these in the Ireland category. See also yvonnejerrold.com and the Wikipedia entry on Robert Brennan. 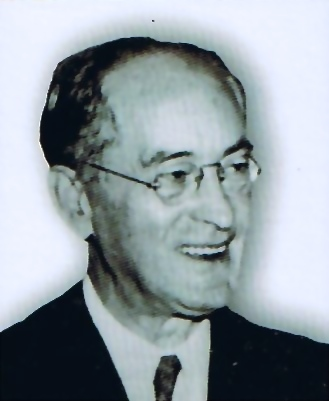 Robert Brennan was born near Selskar Abbey [photo & info.] in Wexford in 1818 [sic, actually 1881 (scroll down)] and was a member of the staff of the Echo Newspaper in Enniscorthy. He organized the Gaelic League and Sinn Fein in Enniscorthy and was a Commandant in the Irish Volunteers. He organized for Sinn Fein until the Treaty of 1921. During the Irish Civil War he worked with Eamonn De Valera. He became a director of the Irish Press from 1930. He joined the diplomatic service and became the Irish Ambassador to Washington. On his return, he became involved in broadcasting. He died in Dublin in November, 1964.

The following is from an undated obituary, believed to be from a Washington DC (USA) newspaper, 1964:

Following the abortive nationalist uprising of Easter, 1916, Mr. Brennan was sentenced to death. The 17-year-old youth had commanded the Sinn Fein troops that seized the town of Enniscorthy.

He later recalled sitting in the Kilmainham Jail listening to the rifles executing his fellow officers. “And then, as though it were a miracle, there came an order that executions must cease,” he remembered.

A native of Wexford Town, County Wexford, Mr. Brennan was the son of a cattle merchant. He went to the Christian Brothers school in Wexford and entered the Royal University of Ireland before becoming active in the independence movement.

When a member of the Irish Republican Brotherhood, he worked as a teacher, clerk, surveyor and newspaper reporter. Until the truce of 1921, he was in and out of prisons while working as a director of publicity for the Sinn Fein.

Mr. Brennan was named secretary of foreign affairs for the newly formed republican government. He later resigned the post to organize the Irish Press, of which he became general manager. In 1934 he was appointed secretary of the Irish Legation in Washington and four later was named minister. He returned to Ireland after World War II to become head of Radio Eireann, the state broadcasting system. He retired in 1952.

He leaves a son and three daughters, on of whom, Mrs. Emer M. Yort, lives at [address removed], Chevy Chase.”

This last is no longer true. Emer was my grandmother, who herself passed away in the late 1980s (and had moved from that address several years prior to that). -Steven

March 2015 WexfordPeople.ie published an article article: Wexford man was a giant of his time.

In July 2016, Robert Brennan and his wife Una Bolger of Olyegate were honoured by the Wexford City Council. 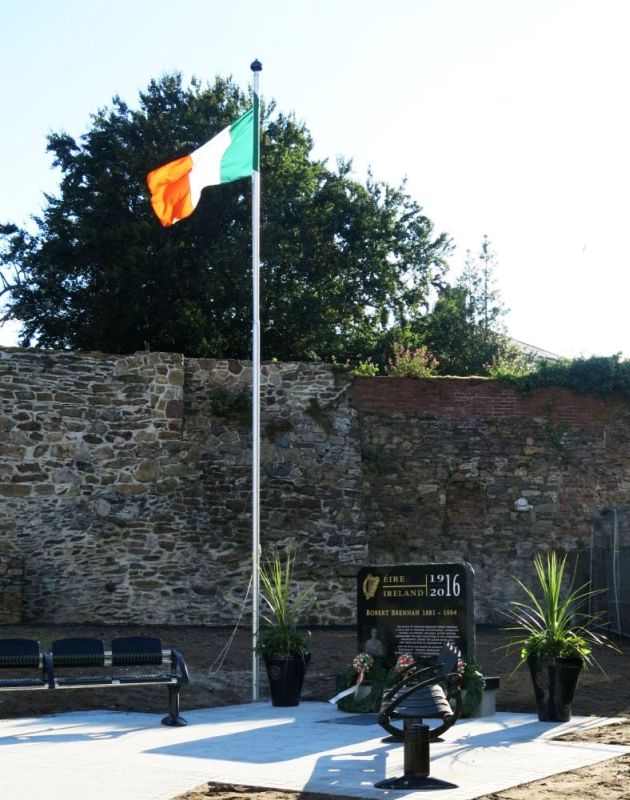 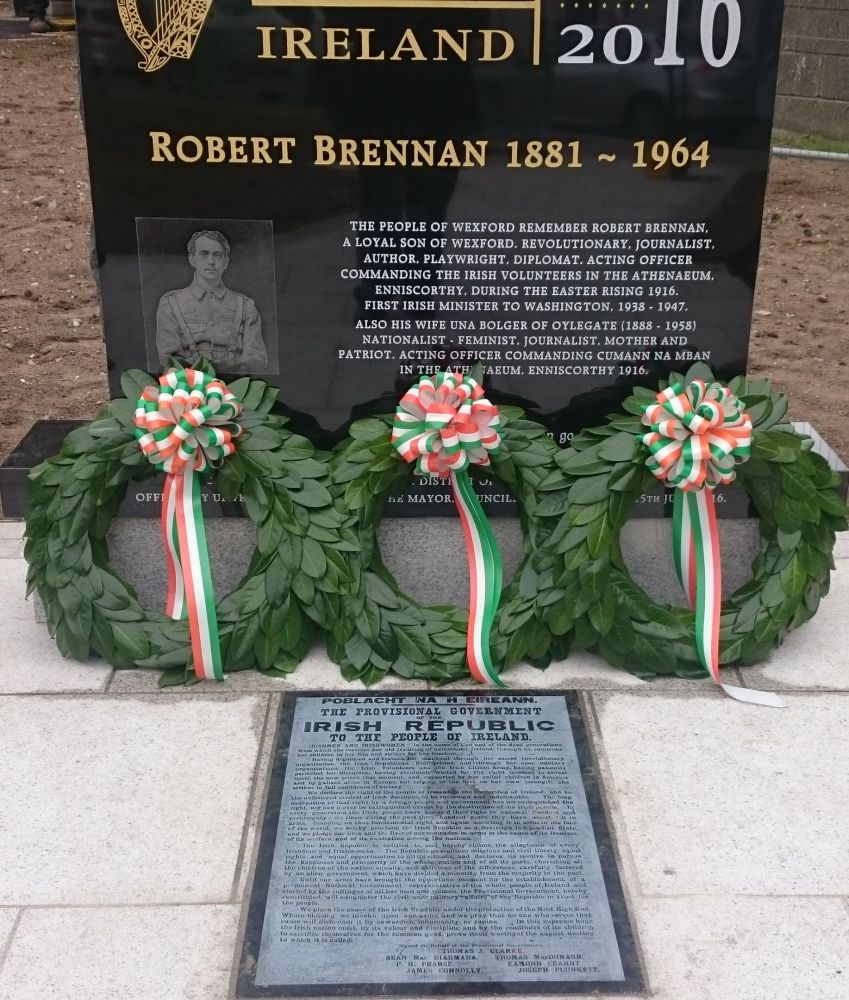 Robert Brennan was also a writer; these are references I’ve found to his books

[18-Mar-2002] pointer: A reference to Allegiance in Michael Collins’ The Path to Freedom. [University of Limerick Young Fine Gael]

[18-Mar-2002] pointer: A short document found at the Universit’ de Gen’ve (archive copy), this appears to be a short biography of Robert. If you can translate this, please let me know. (see also this rough translation, until someone comes along)

From The Irish Times/ireland.com’s special report on the 1916 Rising (emphesis mine):

A force of 600 Volunteers led by Robert Brennan, Seamus Doyle and JR Etchingham seized control of Enniscorthy on Thursday of Easter week. Although the town was occupied after a surprise attack, the RIC barracks was held by a police inspector and five constables while an RIC sergeant and one constable prevented the rebels from taking over a bank in the town.

The Volunteers established a strong position on Vinegar Hill, overlooking the town. The railway line was cut and men dispatched to Gorey and Ferns. The government responded by sending a force of more than 1,000 men to retake Enniscorthy and the rebels retired to their positions on Vinegar Hill. Before hostilities could develop the news of the Dublin surrender arrived, but the Volunteers refused to believe it. The army commander, Col FA French, was a Wexford man and in order to avoid bloodshed he offered a safe conduct for the Wexford leaders so that they could go to Dublin and hear of the surrender directly from Pearse. There were no fatalities.

‘Pressmen’ at the sharp end

The issue for May and August 1916 records that the association’s offices in Middle Abbey Street were destroyed in the fighting. It goes on: “The loss of our Secretary (Mr Pierce Beazley) who has been sentenced to three years’ penal servitude for his participation in the Rising has had an injurious effect on our Organisation.”

It notes that “numbers of other equally brilliant young pressmen and literary men” were arrested after the Rising. Those listed include Robert Brennan from Enniscorthy, Co Wexford, (later the Irish ambassador to the United States, and father of writer Maeve Brennan); William Sears, editor of the Enniscorthy Echo; Arthur Griffith, editor of Nationality; Michael Knightley of the Irish Independent; Brian O’Higgins; and Herbert Pim, editor of the Irishman.

“Had an Irish Republic been established we have been informed that four journalists would have been asked to answer a charge of high treason, so whether the volunteers won or lost in their fight against the forces of the British Government some Pressmen were bound to suffer at the hands of one side or another.”

Traditional Easter celebrations in Eire this year saw the end of another tradition: that Eire awards no medals, that her soldiers wear no foreign decorations. As processions ranked themselves around the graves of men and women who died in the 1916-21 struggle, many an Irish soldier wore, and many an Irish civilian prized, the first medal that Eire has ever issued: for service in the 1916 Rising. A second medal was to go to veterans of the years of guerrilla war that followedâ€”which the Irish call “The Trouble.” Of the 2,000-odd fighters in the Rising, many are dead, others have disappeared. Among the survivors to whom the medal went were Prime Minister Eamon de Valera, three of his Ministers, Opposition Leader William T. Cosgrave, Minister to the U.S. Robert Brennan, Protestant Labor Leader Archie Heron, Actor Arthur Shields.

7. The Main Sites of Activity During the Rising.

On Wednesday a message arrived from James Connolly requesting that the Enniscorthy Volunteers hold the railway line from Rosslare to prevent British reinforcements reaching Dublin. On Thursday the Enniscorthy Volunteers together with contingents from other areas took over Enniscorthy, establishing headquarters in the Athenaeum, a strong position beside the castle. The Volunteers were supplemented by members of Fianna Ã‰ireann and Cumann na mBan. Brigade Commandant Robert Brennan was the officer in charge. The Volunteers took over the town and blocked the roads and the railway line. They surrounded the Royal Irish Constabulary barracks and exchanged fire with the police; they did not, however, attempt to capture the barracks, believing that in time the RIC would surrender. Meanwhile, a force under Captain Paul Galligan occupied the town of Ferns and some of the northern part of the county.

On Saturday news of the general surrender in Dublin reached Enniscorthy. The Volunteers required that the surrender be confirmed: the following day the British escorted Captain Seamus Doyle and Captain SeÃ¡n R. Etchingham to Dublin to consult Pearse in Arbor Hill. On Monday, 1 May, the Enniscorthy Volunteers surrendered unconditionally. While a number of the officers were sentenced to death, all had their sentences commuted.

This document also has a photo of Enniscorthy and two photos of Robert Brennan.

Maeve Brennan was born in Dublin in 1917. She grew up in the middle-class Dublin suburb of Ranelagh. Her parents, Robert and Una, were Republicans and were deeply involved in the Irish political and cultural struggles of the early twentieth century. Robert Brennan (1881-1964) participated in the 1916 Easter Rising and was sentenced to death. The sentence was commuted to penal servitude. His continuing political activity resulted in further imprisonments in 1917 and 1920. Maeve was born while he was in prison. He was director of publicity for the anti-Treaty Irish Republican Army during the Irish Civil War. He also founded and was the director of The Irish Press newspaper. His imprisonments and activities greatly fragmented Maeve Brennan’s childhood. In her story The Day We Got Our Own Back she recounts her memory of how, when she was five, her home was raided by Free State forces looking for her father, who was on the run.

Robert Brennan was appointed the Irish Free State’s first minister to the United States, and the family moved to Washington, D.C. in 1934, when Maeve was seventeen. She read English at the American University in Washington. All the family except Maeve and one of her brothers returned to Ireland in 1944.

I believe this last sentence to be in error; another daughter, Emer (my grandmother) likely also stayed in Washington. I’m checking and will update Wikipedia when I know for sure. [later] Confirmed, this is incorrect. From a relative:

The only members of the family who returned after the war were Grandfather [Robert Brennan], Grandmother and their son, Robert Patrick. Emer did not go back at all (apart from one brief visit with her father some years before she married) and Derry did not return until 1950 after her husband, Gilbert J, died in April of that year.

Incidentally Emer, Maeve and Derry had only one brother, unless you count the baby, Manus, who died before she was born.