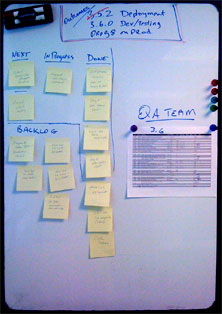 If multiple people independently set priorities for your organization, are priorities really set at all? How do you know what to do when you’ve got too many “very important” tasks on your to-do list, and someone brings you another?

One suggestion is to stop focusing on tasks.

My personality — and I suspect that of many of my tech-minded friends — leads me to itemize every little detail, plan every move before getting started. That can result in very little actual work getting done (more on that in a later post), but also causes a lot of frustration. When you’ve got a list of 20 tasks ahead of you, where do you start? Especially when each of them has been deemed “priority” by someone.

J.D. Roth, among others, suggest taking a slightly longer view. “On Mondays, simply identify three outcomes—compelling results—you’d like for the week.” For me, that’s a good way of asking Cass McNutt’s four questions. A week is long enough to provide context and direction while not being so long-term to be easily ignored.

I’ve found this not only helps in deciding minute-to-minute what task to work on. Once you figure out what are the important stories and how they should look by the end of the week, decisions become easy. Well, easier anyway. Focus on the tasks that move the stories forward; let the others go. 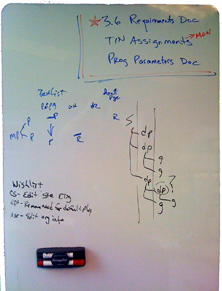 At the office, I’ve also begun putting my weekly outcomes atop my whiteboard. “What to do next” becomes easier to answer in light of these medium-term goals.

Not only does this serve as a constant reminder to myself, it also helps sort out the question of others’ priorities. Now when anyone brings me a task and interrupts my work, I turn to the board and ask if it’s important enough to keep these stories from being completed by the end of the week. If they say yes, I cross the story off the whiteboard, making it plain that they’ve made a decision to change priorities for me and my team. I’ve found that this helps provide focus to other managers as well — and that can only help reduce frustration throughout the organization.

This past week, I read Practices of an Agile Developer, not because I’m currently employed as a developer, nor because my employer uses them, but because I believe the guidelines are good ones to be practiced no matter what the profession. Check out some readers’ notes, then invest some time in the book yourself, especially if you are in the software development arena.

When you walk in the room today — at your office, church, hobby group, poker buddies’ place, or at home — what effect do you have on the people there? As ice cools the liquid in a drink, you can change everyone’s emotional state just by adding yourself to their midst.

Are you managing your own mood, and being a positive influence on your co-workers, employees, family members, and the other people around you? As Tim Sanders writes today, “If you want to lead, lead the mood state upwards.”

It’s Friday afternoon, and Tim Sanders has some thoughts on sending work-related email on weekends.

These habits can ruin weekends, drive turnover and burnout and weaken relationships.

In other words, not a good idea.

(Unless you’re writing to schedule a job interview with me

, in which case a phone call would probably be better anyway)

Good news for any PM who’s also a Mac person in a sea of Windows users. The Omni Group’s OmniPlan is in beta, with an expected price tag of US$149. The best part of all (other than being a sweet-looking Mac app, of course):

OmniPlan can open and save Microsoft Project files natively

That should smooth some of the rough water. Now, to get the project sponsors to free up a bit more funding…

Al Hawkins: Productivity and the Law of Unintended Consequences:

I hope they understand that this means an end to the free tech support Iâ€™ve been providing, like programming the fax machines and kickstarting the network printers when they hung. No more productivity-enhancing projects, like the wiki and the information entered therein performed during the odd quiet moment. No more tutorials on web resources to speed information retrieval for insurance auths.

Echo echo echo… from my August 29, 2002 post on Corporate Culture: “The managers, intent on “making the numbers”, drove any thought of quality or customer satisfaction right out of the process.”

As we’ve seen before, getting your inbound email under control will give you a huge productivity boost, but what about all the emails you send? If you want to be a good email citizen and ensure the kind of results you’re looking for, you’ll need to craft messages that are concise and easy to deal with.

It’s been a while since I wrote about Knowledge Management & Blogging. While trying BlogBridge, I noticed that it comes with a set of pointers to, among other things, some KM blogs.

Here are a couple that have interesting articles posted recently. Knowledge-at-work (see Sharing knowledge – do we know enough? for example), and APQC (including two interesting posts on Copyright and Ownership of “company ideas” posted on personal blogs).

Bonus link from Bug Bash: “If youâ€™re already leading a 30-person Java implementation, itâ€™s way too late to go back to the boss and admit you picked the technology because you like coffee.”

David St.Lawrence was writing the other day about communications. Well, about getting another person to listen to you, which is partly about communicating. As the guys in the sessions I taught would probably tell you — I know I said it more than enough times throughout the course — there’s something I consider paramount to communicating.

Before talking or writing, before picking up the phone, pen, or keyboard; before heading out the door to find someone, before even David’s step 1, you’ve got to ask yourself if you care. Not “do I care” about being right, or about proving your own point, but “do I care” about the other person?

If you don’t care about the person and the topic, there are several reasons why your communication will fail. Perhaps the most obvious is that you won’t put your heart into it, you won’t do enough thinking or research up-front, you’ll only do a half-assed job and they’ll know it. It’ll be obvious that you really don’t care and they’ll just tune out. You’ve probably had teachers or presenters that didn’t prepare well, didn’t listen to your questions, were just there to read the material to you — you knew it immediately and you checked out mentally (and some of you stood up and walked out).

Or maybe you just thought they didn’t care — and “perception is reality.” You walked out anyway.

So let’s add an item to the beginning of David’s list:

Incidentally, this is why some instances of “corporate blogging” fail — it’s immediately obvious to readers when companies are seeing a marketing opportunity rather than a real conversation.