“If a homeless man froze to death on the steps of a church, what would it change?” 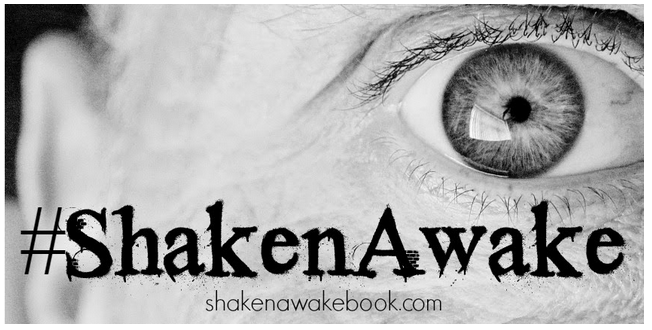 That’s the question being asked by my friend Allen in his new book, Shaken Awake. Allen uses real-life events that many of us here in the Atlanta area experienced just ten months ago to tell a tragic tale, one that – though this is a book of fiction – happens much too often not only in Atlanta but in cities all across our nation.

During my business travels, I’ve seen homeless on the streets of Austin, and Orlando. I’ve been approached with pleas of assistance in Washington and San Francisco. I’ve jogged through camps under bridges in Portland. And yes, here in Atlanta I’ve spoken with some of those living on the streets and have volunteered in night shelters.

Reading Allen’s book made me ask myself “is that enough, what else can we do – what else can I do?” I encourage you to get a copy and answer questions for yourself.

Shaken Awake will be available from Amazon and other retailers later this week, in the meantime keep an eye on http://shakenawakebook.com/

Update: Shaken Awake is now available for Kindle devices and software at Amazon.

“So, first of all, let me assert my firm belief that the only thing we have to fear is fear itself — nameless, unreasoning, unjustified terror which paralyzes needed efforts to convert retreat into advance.”
Franklin Delano Roosevelt [March 4, 1933]

“Do not be afraid of those who kill the body but cannot kill the soul. Rather, be afraid of the One who can destroy both soul and body in hell. Are not two sparrows sold for a penny? Yet not one of them will fall to the ground apart from the will of your Father. And even the very hairs of your head are all numbered. So don’t be afraid; you are worth more than many sparrows.”
Matthew 10:28-31 The show was a great success, from several perspectives. It not only raised the funds needed, it brought together a whole bunch of folks for a night of good music and worship. Good times indeed.

As my friend Jason’s prayer goes, “God give me the wisdom to deal with things I can’t deal with and the strength to walk through the things You have given me.” Today’s departure is disappointing, but we all know that without change life stagnates. I’m sure that the Lord has a plan; my mother used to say that “when He closes a door, He opens a window.” My job now is to follow His plan and find the right window.

“Go and do likewise.”

On October 30, 1998 Hurricane Mitch struck Central America. Almost 3000 people were killed around Chinandega, Nicaragua, and entire villages disappeared under volcanic mudslides. The government was unable to to provide much for the people and over 300 of the surviving families were move to what little land was available – on top of a huge trash dump. Amigos for Christ has been working since 1999 to move them and help rebuild the community of Villa Catalina.

The people of Villa Catalina have been working together alongside Amigos’ volunteers, building houses — not knowing until it was finished which family would live there, a decision made by lottery in exchange for a certain number of hours of community service. The homes are 25’x25′ three room buildings with concrete walls, some with as many as 8 people living there with a small stove and a garden out back.

Today, teens and adults from St. Thomas visited the previous “home” of so many — the dump — then set to work. They worked on a medical center, and church, as well as painting houses and playing with kids in broken Spanish.

Today was, in their leader’s words on the phone, “a really an amazing day.”

Many thanks to all of you who helped make this trip possible, through your prayers and financial support.

I read a fascinating book this weekend, Ian Wilson’s Murder At Golgotha.

Subtitled “Revisiting the Most Famous Crime Scene in History,” it’s an interesting look at Jesus’ crucifixion and other events during Holy Week from a forensic and analytic perspective.

While not proving the Bible to be 100% factually correct (neither completely possible nor necessary at all, for believers), Wilson’s book reviews all the testimonies and compares them with other historical and archeological documents as well as scientific examination of artifacts to show how they corroborate each other and helps clear up some possible misunderstandings that have crept into our culturally passed-along understanding.

I was watching the Vertigo concert DVD (thank you, Brennan) the other night, and at one point Bono puts on a bandana with some graffiti. As I transcribed his comments (yea, I do strange things sometimes), I wasn’t able to hear completely and missed one or more words – see the quote below. When I went searching the web to see if anyone else had gotten the text, I found somehwat of a controversy broiling about. My take? I heard “it’s true,” at least on the DVD.

Anyway, if you’ve got the DVD and can tell what word(s) I missed please let me know