In 1998, I was working for Digital Equipment Corp (DEC) and the NASA Payload Data Management Systems group at Kennedy Space Center was one of my customers. I was able to schedule an onsite visit for December, right at the time of a scheduled shuttle launch, and they got me tickets to the turn basin bleachers – about the closest you can get to the launch complex, next to the big countdown clock. The launch was to be about 4:30am on the 3rd, and I was there. A spot of trouble delayed the launch, and had to be rescheduled for the next morning. After a day of work and a bit of sleep, I was there again.

Watching the Endeavour leave the Earth on its way to the International Space Station was one of the most impressive things I’ve ever seen.

It saddens me that the launch scheduled for today will be the final one for America’s shuttle program — as far as the public can tell the final launch for NASA — and that future generations won’t have the chance to be as proud of our nation as I was on that night. 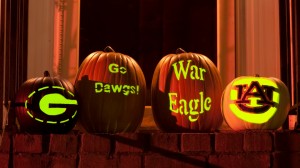 The younger of our two sons is now also off to college, and my wife & I had an opportunity to visit with him on campus of Auburn University this past weekend. We also used TicketCity to get a couple of seats for the football game, and boy are we glad we did! We’ve been to many High School football games over the past years, and we’ve both attended games at other, smaller, colleges. This was, though, our first SEC Football game, and it was quite an experience.

When I first moved to the south back in 1992 I mentioned to my manager that I had seen cars with flags on them, something I’d never seen before. They’re available all across the country now, but back then this was something brand new for me. “You’ve got to understand,” she replied, “in the south everything revolves around Jesus and college football – and on Saturday, Jesus is number two.” She was joking — or at least I thought she was — but for many it really does seem to be the case.

The entire campus was filled with tailgating fans — cooking on portable grills, partying under brightly-colored tents, playing touch football in any open area they could find. I expected to see college students, but was surprised by the number of families; every age range was represented, from the youngest toddlers through oldest alumni.

Our seats were excellent, down near the field, and we enjoyed watching the mascot as he entertained the crowd and took time to greet every youngster he could. We also got to meet “Mr. Penny,” an Auburn super-fan who’s energy was unstoppable. Though rain fell throughout the evening, the fans were energetic and the game was great.

If you have an opportunity to get some tickets to a big-University football game, especially an SEC game, jump at it. I’m told that gameday is similar at the University of Georgia (and other schools), we’re looking forward to a game there in a couple of weeks.

Photography is, when all is said and done, an art in which light is a very important element. Where there is little light, we do what we can to compensate. We use strobes, we use fill lights, we use reflectors — sometimes with good results, but often not.

There are times to just say “the heck with it” and work with what little light exists. My older son played in a benefit concert this weekend, and I have several photos for which I used flash. I’m not as happy with any of them, though, as I am with this shot (for which the strobe did not fire). Technically, it’s not a good photo – it’s “noisy,” details are lost in the shadows, and I had to push the exposure and contrast way to far. But in the end, this image best captured his smile and the enjoyment he was having on stage. For me, this is the best picture from the day. It was a beautiful day and I got out of the office a little early; we’d moved my son into his college apartment this past weekend but he’d forgotten a couple of little things — a perfect excuse for a ride. I took a camera along but of course didn’t take as many pictures as I’d like, but anyway… I took the GPS along; here’s the track (and clicking on it will get you the real map).

Once out of Atlana’s traffic, the country road opened up nicely.

There was quite a delay near the town of Oak Hill, with traffic stopped due to road resurfacing. That was a little frustrating, but I was fortunate to be stopped in the shade of a large tree, right next to a couple of beauties set out on display:

Without too much delay things got moving again. I just happened to look down at the instrument panel at the right moment and had to stop for a photo.

It was a beautiful afternoon passing through the countryside, crossing Lake Sinclair…

I did get to Milledgeville and had a nice dinner with my son and got on the way back home as the sun was going down. I’d passed an example of a cultural icon, the small country church, on my way and wanted to be sure I stopped on the way back. I hadn’t noticed the power lines; I need to find another one that’s without “modern” visual obstructions.

I’d started out about 3:30pm and returned home at about 10:45, it was a long day including work before the ride and dinner in the middle. Long but very satisfying.